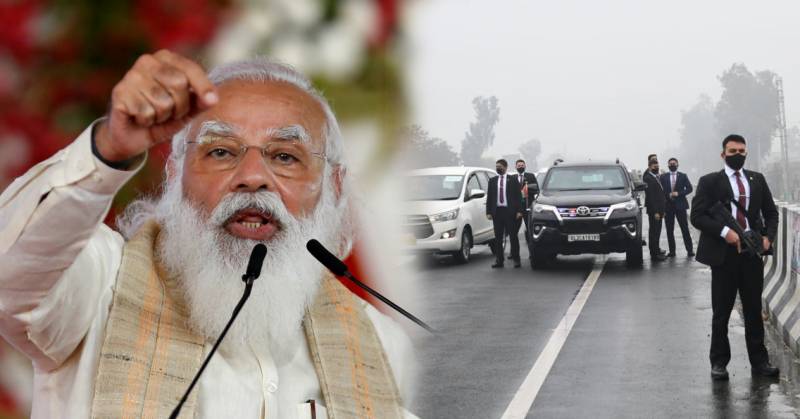 NEW DELHI – Indian Prime Minister Narendra Modi canceled his scheduled visit to Punjab in wake of a major ‘security breach’ as his convoy got stuck on a flyover amid protest by Sikh farmers.

Reports in Indian media said the 71-year-old was scheduled to visit Punjab to address a rally in the city of Ferozepur, ahead of state elections. He was also supposed to lay foundation stones for several development projects and to address the people while he landed in Bathinda earlier and then headed for the Ferozepur district which is located along the Pak-India border.

Modi was reportedly trapped for around 20 minutes on the flyover due to a road blockade from agitators and the ruling party ministers are terming the event as a ‘major lapse’ in his security. The agitators were protesting for the resignation of the minister, whose son has been accused in an incident that left eight people dead.

Following the unwanted incident, the BJP leader decided to return home without attending an event at a martyrs’ memorial. Meanwhile, the central government has asked the Indian Punjab officials to fix responsibility for the lapse and take strict action.

Indian PM before flying back to New Delhi said Apne CM ko thanks kehna, ki mein Bathinda airport tak zinda laut paaya [say thanks to your CM that I was able to return to Bathinda airport alive].

Amid the outcry from right-wing leaders, Indian Punjab CM Charanjit Singh Channi denied any security lapse, saying that PM Modi’s decision to take the road route from Bathinda to the martyrs’ memorial at Hussainiwala near Ferozepur was taken at the last moment.

Punjab Chief Minister Charanjit Singh Channi cleared the air saying there had been no security lapse on the part of his government.

Indian media quoted him saying “We had asked PM’s office to discontinue the visit due to bad weather and protests. We had no information of sudden change in route and there was no security lapse during the PM’s visit”.

He also mentioned saying “I express regret that PM Modi had to return during his visit to Ferozepur. We respect our prime minister” saying officials will inquire into the matter if they found any evidence of a security lapse.