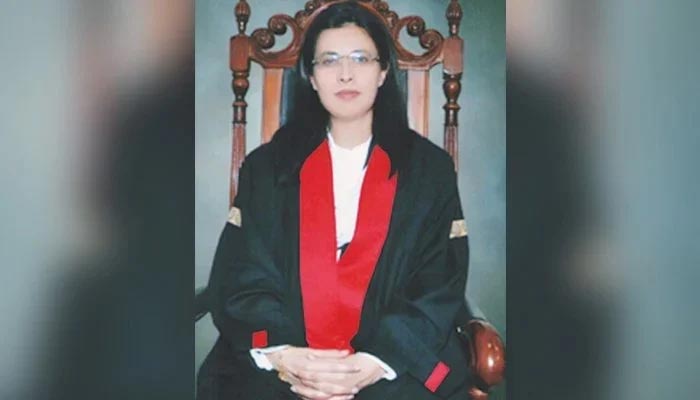 ISLAMABAD: The Judicial Commission of Pakistan (JCP) on Thursday approved the nomination of Justice Ayesha Malik for her appointment as the Supreme Court judge with a vote of five to four.

She will be the first female Supreme Court judge in the judicial history of Pakistan if appointed.

The final approval regarding the appointment of Justice Ayesha Malik had been sent to the Parliamentary Committee on Judges.

A meeting of the JCP was held today under the chairmanship of Chief Justice of Pakistan (CJP) Justice Gulzar Ahmed, during which five out of nine members of the commission supported the appointment of Justice Ayesha Malik to the Supreme Court.

It is pertinent to mention here that Justice Ayesha Malik is ranked fourth in the Lahore High Court in terms of seniority.

The Pakistan Bar Council had declared a strike against the appointment of Justice Ayesha Malik.

Out of the 17 judges appointed in the Supreme Court, Justice Ayesha Malik has been nominated for the seat which became vacant after the retirement of Justice Mushir Alam on August 17.

Jumping Over the Broom at Marriage ceremony