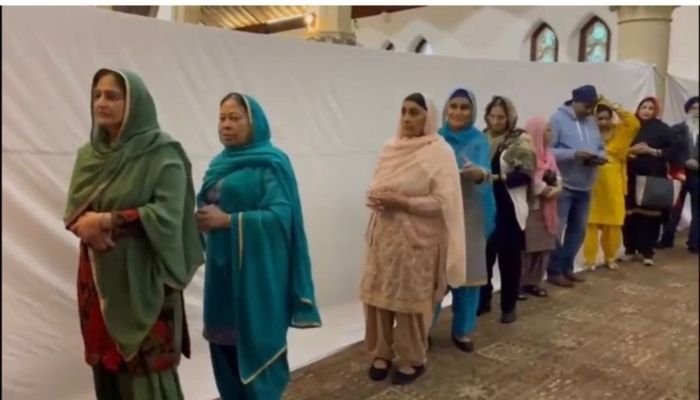 LONDON: On New Year’s Eve, the British Sikh community held voting on the Khalistan Referendum at four locations, with thousands of people, including a 95-year-old Sikh woman, turning out to vote in the non-binding referendum.

The organisers of the Khalistan Referendum, Sikhs For Justice, estimated that 20,000 individuals voted at four locations on December 31, 2021.

Sikhs for Justice organised voting at four locations on December 31 to conclude the year on a high note, as voting began exactly 60 days ago on October 31, 2021 outside the Palace of Westminster and was later held at regular intervals in more than ten places outside of London.

Over 200,000 Sikhs voted in the Khalistan Referendum over the course of 60 days, garnering widespread attention and enraging India to the point where India’s Foreign Secretary raised the matter of voting with British Prime Minister Boris Johnson and the UK Foreign Minister.

Last month, a Khalistan Referendum was held in Geneva, Switzerland, which drew nearly 6,000 Sikhs from throughout Europe despite a snowstorm.

The participation of a 95-year-old Sikh woman, who stated it has been her lifelong dream to see an independent Khalistan state, was the highlight of the December 31st voting.

“I don’t know how long I’ll survive, but my wish to participate in the Khalistan Referendum has come true,” she remarked. “I’ve done so in honour of those Sikh martyrs who gave their lives for the noble cause of Khalistan.”

“To silence us, the Indian state has killed some of the brightest Sikh youth, but we will never surrender, and this is my message to our new generation: keep fighting and raising our voices for Khalistan,” she said.

According to Gurpatwant Singh Pannun, General Counsel of Sikhs For Justice, Sikhs in Britain have shown their desire for the liberation of Punjab from Indian occupation through voting.

The Indian government has gone out of its way to target Sikh leaders, particularly those affiliated with the Khalistan Referendum and campaign, according to Gurpatwant Singh Pannun.

“India has attempted to paint us as terrorists, but the entire world has seen that we are peaceful and democratic people who believe in ballots rather than bullets, and this is what scares India,” Punnun remarked.

Since 2019, India has designated Sikhs For Justice (SFJ) as an unlawful body under the draconian colonial-era “Unlawful Activities Prevention Act” (UAPA), and its General Counsel, Gurpatwant Singh Pannun, a US-based lawyer, as a “terrorist.”

SFJ’s novel Khalistan Referendum, which began on October 31 in London, seeks votes from the Sikh diaspora on the question of the secession of Punjab and other Sikh majority areas from India.

More than 30,000 Sikhs voted on the first day of voting, which was held close to the British Parliament on the day of Indian Prime Minister Indira Gandhi’s assassination.

Revival of IMF’s loan to Pakistan rests on clearance from two departments: report