Focus Media
Home Sports NZ vs Ban: ‘I am a soldier of Bangladesh Air Force so... 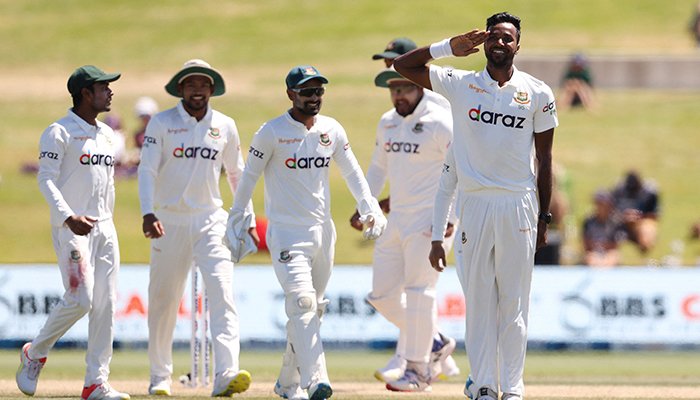 Ebadot Hossain, who took his career-best 6-46 to help Bangladesh beat New Zealand for the first time in a Test match, has revealed that he was an employee of the Bangladesh Air Force — which has helped him work out a Sheldon Cottrell-like salute celebration.

“I am a soldier of Bangladesh Air Force so I know how to do the salute […] It was a long story, from volleyball to cricket. I am enjoying cricket, representing Bangladesh and Bangladesh Air Force,” he said after the Test fixture ended and he was awarded the Player of the Match award at Mount Maunganui.

The seamer said after a rough Test career start, he has to work on his patience.

“In the last two years, I have been working with (bowling coach) Ottis Gibson,” he said.

“Conditions are always flat at home. We are still learning how to bowl and reverse in away conditions. I am trying to hit the top of the stumps. I needed to be a little patient for success to come.”

The seamer, who was splendid in the Test as he dismissed all the major players, including Ross Taylor, hoped his six-wicket haul could serve as a benchmark for future Bangladesh cricketers.

“I would like to give thanks to Allah for the Test win. Our brothers and teams didn’t get a win in the last 21 years in New Zealand. We set a goal this time. We raised our hands. We said, ‘we have to beat New Zealand in their own soil’,” he said.

“Now that we have defeated the Test champions, our next generation has to beat New Zealand.”

Bangladesh’s eight-wicket victory at Mount Maunganui was among the biggest shocks in the history of Test cricket as one of the poorest performers in the longest format of the game snapped New Zealand’s 17-match unbeaten streak on home soil.

While New Zealand had beaten all-comers at home since their last loss to South Africa in March 2017, Bangladesh had lost all 21 of their matches in New Zealand, Australia, South Africa and England since they started playing Test cricket in 2000.

Ebadot, who had taken 11 wickets in his 10 previous tests, led the way as the tourists dismissed the ‘Black Caps’ for 169 early on day five to leave them requiring 40 runs for a famous victory.

After losing both openers in the chase, it was left to captain Mominul Haque and experienced batsman Mushfiqur Rahim to usher Bangladesh to their first victory outside Asia.

A small band of flag-waving Bangladeshis on the Bay Oval boundary celebrated their country’s first win in any format of the game in New Zealand, a victory that gave them a 1-0 lead in the two-match series.

How Pakistan’s star players performed against Australia in Test series

This individual Went On-line After Our Date