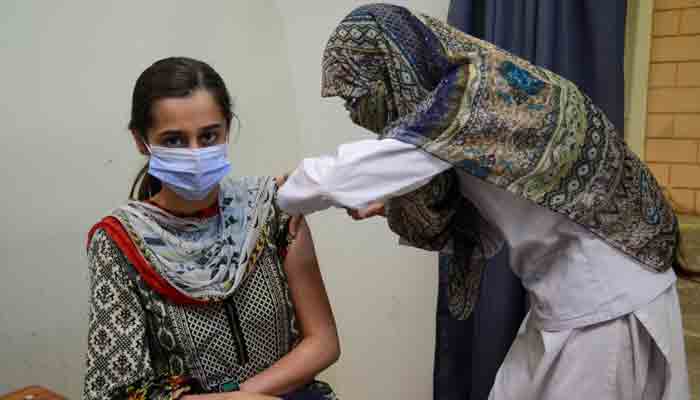 he Sindh government has decided to launch a door-to-door coronavirus vaccination campaign for women amid rising cases of the Omicron variant in Karachi and other major cities as the fifth wave spreads across the country, The News reported Friday.

The development came after it emerged that most of the non-working women are still unvaccinated in the metropolis and a decision was taken to deploy lady health workers (LHWs) and female vaccinators for the purpose.

“We have decided to send LHWs and female vaccinators to each and every house in Sindh to vaccinate people, especially women, against COVID-19 because most of the non-working women in Karachi as well as other major cities and rural areas of Sindh have been found to be unvaccinated,” MPA Qasim Soomro, parliamentary health secretary in the provincial assembly, told The News.

Authorities in Sindh said on Thursday that 759 people had tested positive for COVID-19 in the province during the past 24 hours, of which 648 of the cases belonged to Karachi alone.

They said that of these 648 people, 95 were found to be infected with the Omicron variant.

MPA Soomro said that although no data was available to them, most of the non-working women in the province were unvaccinated, especially in Karachi’s Korangi and Malir districts as well as some areas of District East, adding that on the other hand, most of the men in Sindh were vaccinated due to their occupational requirements.

“Vaccination of women against COVID-19 has largely been ignored by the heads of their families, especially those women who are housewives and don’t work in public and private sector offices and businesses. This section of the population is most affected due to COVID-19, especially the Omicron variant, which is targeting unvaccinated population very easily.”

“Training of LHWs and female vaccinators is underway, and hopefully, they will be trained in vaccinating people by the end of this week. Door-to-door vaccination against COVID-19 will hopefully commence by the start of next week.”

Sindh Chief Minister Syed Murad Ali Shah on Thursday said infections with the Omicron variant are constantly on the rise, especially in Karachi, where the positivity rate of COVID-19 cases is rising alarmingly due to the rapidly spreading variant of the coronavirus, and urged people to follow the standard operating procedures.

CM Shah said that between December 28, 2021 and January 2, 2022, whole-genome sequencing of 133 samples was carried out, of which 95 were detected as Omicron, taking the variant’s tally to 268 in the province. He added that a few cases have travel histories, otherwise most of them were locally transmitted.

It may be noted that Sindh had 173 Omicron cases earlier, and with the emergence of 95 new cases, the number has increased to 268.

“It shows that the new variant is spreading fast and needs to be controlled through precautionary measures,” said the CM.

Referring to the daily situation report, he said that two more patients of the coronavirus died overnight, lifting the death toll to 7,678, which constituted a 1.6% death rate.

The CM said that 7,583 patients are currently under treatment, of them 7,386 are in home isolation, 48 at isolation centres and 149 at different hospitals, adding that the condition of 142 patients is stated to be critical, including 16 shifted on life support.

Going out with Statistics – How Long Should a Romantic relationship Last?