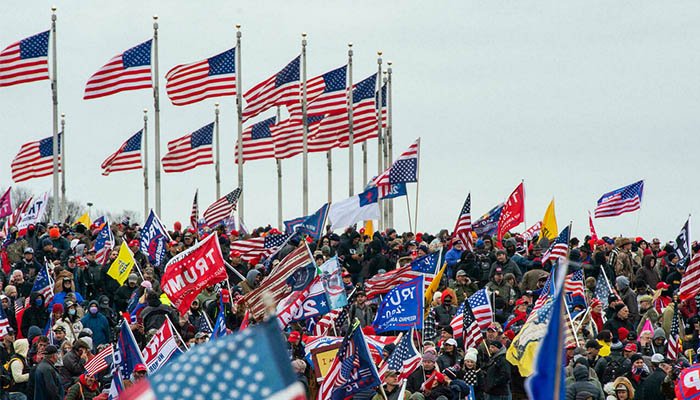 One year ago to the day, they descended upon Washington in the thousands, gathering to protest the result of a presidential election they claim was rigged.

The US Capitol came under attack, leaving the country wounded.

As President Joe Biden delivered a speech assailing Donald Trump for the mayhem, people who participated in the events of January 6, 2021, gave AFP their accounts of a day that shocked the world.

“January 6 was incredible,” says Samson Racioppi, a 40-year-old Republican Party stalwart who rented several buses to drive people to Washington from his home state of Massachusetts.

The day began with outgoing Republican president Trump addressing a sea of supporters waving “Trump 2020” flags in the biting cold near the White House.

Trump fired up the crowd with a defiant speech, repeating his false claims that he won the November election over Democrat Joe Biden.

“I remember the actual feeling of that day of euphoria,” said Jim Wood, a military veteran who came to Washington from New Hampshire. “Seeing all the people.”

Before Trump finished speaking, Wood, who is in his 60s, headed towards the Capitol, where Congress was certifying Biden’s election victory.

Thousands of others did the same and an enormous crowd quickly assembled around the brilliant white dome of the Capitol building.

“Then all of a sudden, you heard, I guess, from my remembrance, screams of, you know, ‘Let’s go, let’s go, let’s go,'” said Glen Montfalcone, who also came to Washington from Massachusetts.

“And then kind of anarchy started happening,” Montfalcone added.

All three men insist they did not enter the Capitol itself. They could be risking prison if they admitted they did.

Hundreds did swarm the building, however, including a tattooed, half-naked man wearing horns and a fur hat.

One protester was shot dead by police.

The world watched live, aghast, as the citadel of American democracy came under assault.

Wood said the televised images he saw broadcast the next day at breakfast were “demonising” and that the vast majority of the protesters remained outside the Capitol.

During the next few months, two competing narratives would arise.

Trump supporters claim it was a peaceful protest against a “stolen” election.

Police officers who fought with the mob, Democratic lawmakers and even some Republicans called it “terrorism.”

FBI at the door

In the wake of January 6, law enforcement launched a nationwide sweep for participants in the assault on the Capitol.

Montfalcone has had FBI agents turn up at his door. Several friends have been arrested.

At his law school, students unsuccessfully attempted to have Racioppi thrown out.

In Washington, a House of Representatives committee is investigating what has been described as an insurrection or a coup attempt.

The January 6 participants reject this characterization of the day.

On the contrary, Racioppi says proudly, “this is something I’m going to tell my grandkids about.”

He remains convinced, like many Republicans, that the 2020 election was “stolen” from Trump, despite the absence of any credible evidence this occurred.

Likewise Wood, an Air Force mechanic who spent years working on B-52 bombers, insists the election was fraudulent.

Of Biden, he says, “I don’t consider him the president of the United States.”

Racioppi said January 6 was just a skirmish in an ongoing conflict.

“We’re looking at it as if it’s a war, right?” he said. “We’re going to cause as much political damage to the left and the people who support tyranny as possible.”

Would he do it again?

Will Prince Harry and William bury their hatchet for good?