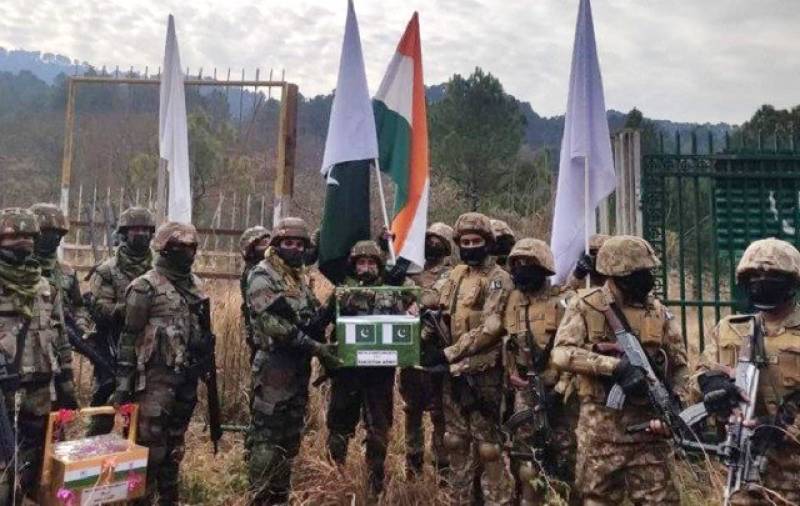 ISLAMABAD – On the occasion of New Year 2022, the Pakistani and Indian border forces exchanged greetings and sweets along the Line of Control (LoC).

Reports in local media said the troops deployed at both sides of Line of Control (LoC) exchanged sweets at four places and wished each other a ‘Happy New Year’.

The different locations where forces interacted near the Line of Control (LoC) include Parachkothi and Poonch sectors.

Despite ceasefire violations and violence by Indian forces, the exchange of sweets between two arch-rivals along the LoC on their respective days of national importance has been a recurring feature.

Meanwhile, there were no reports of the exchange of sweets between the border forces of the two countries deployed at Wagah in Lahore and the Gandasingh border in Kasur.

An improved situation is viewed along the LoC after the two sides reached a ceasefire agreement last February. Earlier in August 2021, Pakistani Rangers exchanged sweets with India’s Border Security Force at the Attari-Wagah border on the occasion of the country’s 75th Independence Day.

In a significant development in the disputed Himalayan region, the Chinese and Indian troops also exchanged sweets and greetings on New Year at several border posts along the Line of Actual Control (LAC) including Eastern Ladakh, where the two sides are engaged in a bitter standoff for more than a year.

PSL 2022: PCB to not draft James Faulkner in future tournaments over ‘gross misconduct’ |

Will Smith ‘would have been removed’ for hitting a host, says BAFTA organisers