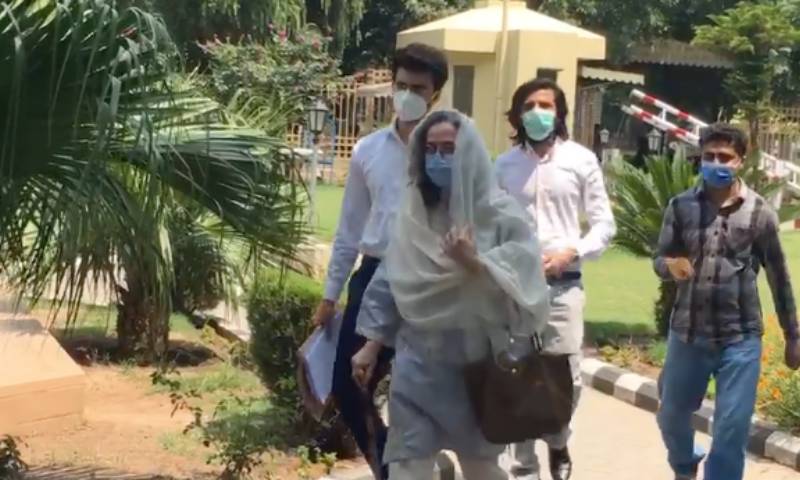 Sarina Isa, wife of Justice Qazi Faez Isa of the Supreme Court, on Saturday sought registration of cases against four men who allegedly entered her house in Karachi without her permission and harassed her.

She has demanded that those who directed these men to enter her home also be named in the case.

In the letter, dated December 31, 2021, Sarina said her parents owned a house in phase V of Karachi’s Defence Housing Authority (DHA) area and after their demise, her brothers gave her their share in the house.

“I came to Karachi to clear out my parents’ things and to repair/paint the house,” Sarina said in the letter, adding that on December 29, “when I was supervising the work at around 12:15pm, two gentlemen walked into the house saying they were from the military intelligence (MI).”

She said she asked them for a written authorisation that permitted them to enter her house and talk to her, but they did not provide any.

“I asked them for their identity cards, but these too they did not give me,” she said. “On my asking, one said he was Muhammad Amjad but the other refused to give his name.”

According to a report in Dawn.com, Sarina said the two men asked her questions about her family and to fill out a four-page document, “which did not say MI on it nor mentioned the name of any other organisation”.

“At that time my daughter was with me. Both of us were shocked and disturbed that two gentlemen could just walk in and question me in my house like I was a criminal,” she added.

She said after “intimidating” her, the two men left saying they would come again after two days to collect the “fully filled-in” forms.

“Soon after they had left, while we were still quite shaken, another two gentlemen walked into my house, saying they were from the intelligence department [and] sent by the Ministry of Interior,” she wrote. “They, too, asked questions about my family.”

“In front of them, I called and spoke to a senior officer of DHA and told him what was happening … he informed me that DHA, Military Estate Office and the cantonment board do not require such information [as the men were asking] and they were not sent by them,” she wrote in the letter.

She said the officer advised her to insist that the men visiting her house wrote to her to formally ask for the information they required, also mentioning why they needed the said details.

“I made the gentlemen talk to this helpful senior officer of DHA. [But] these gentlemen did not give me a paper copy of the information they asked for and instead asked for my phone number to WhatsApp it to me,” she said. “They said they will come again and I better provide all the information or else face consequences.”

Citing the four-page document given to her by the two men who initially visited her house, Sarina said she had been asked for details about her political affiliation and also that of her late parents and other family members, her career profile, foreign visits and their durations, her blood relatives living abroad and those in armed forces, her relatives working for non-governmental organisations, her contact numbers, WhatsApp number, SIMs registered under her name, email address, social media activities, bank account number and the branch in which it was opened and “all my family details, including the names and profession of my adult children”.

She particularly stated, addressing the secretaries of defence and interior ministries: “Would you please let me know why these gentlemen were deputed and who authorised them to enter my house and ask me questions and under which law. Furthermore, why could you not have sent a simple letter asking me to provide answers to questions if they were required to be answered under some law and instead, four hurly burly gentlemen [were] told to enter my house, violate my privacy and dignity and harass and intimidate me.”

“The intimidating, menacing and pressuring tactics against me and my family continue,” she wrote, referring to a probe into her finances by the Federal Board of Revenue (FBR) initiated in 2020 in the aftermath of a presidential reference against her husband, Justice Isa.

“First it was a Mr Dogar, ‘the self-proclaimed tout of the ISI’ who wrote to a Mirza Shahzad Akbar, a former beginner level NAB (National Accountability Bureau) employee who the prime minister appointed as the chairman of an illegal organisation, the Assets Recovery Unit (ARU),” she wrote.

She further said that Muhammad Ashfaq Ahmed was appointed as a member of the ARU and started “calling the shots in the FBR” with Akbar’s help.

“They dishonestly tried to pin my and my adult working children’s properties, and which for years were in our names, on my husband; this failed and the presidential reference filed against him was dismissed.”

“I sought to revert my RTO back to Karachi so that I could file my income tax returns but could not succeed to do so and Mr Muhammad Ashfaq Ahmed did not have the courtesy to reply to my requests,” she said, adding that her RTO was reverted only after the matter was highlighted in the media and the Supreme Court directed to do so.

She also wrote about Rawalpindi-based cleric Agha Iftikharuddin Mirza, who she said was launched in an attempt to “provoke the murder of my husband by broadcasting a vile and disgusting death threat on YouTube”.

Sarina said when she went to police for the registration of a first information report (FIR) against Mirza, the station house officer told her that the FIR would be registered after talking to the interior minister.

While police did not register an FIR, the Federal Investigation Agency (FIA) registered one for a “crime which I did not report to the FIA”.

“The upright director general (DG) who headed the FIA stated to the media publicly that Law Minister Farogh Naseem ordered him to proceed against my husband after meeting with the prime minister, but when he [FIA chief] refused, he was removed from office and replaced by one who would do their bidding,” she wrote.

She alleged that the matter was referred to the FIA to give time to Mirza to “remove and destroy incriminating evidence, to control the outcome”.

She said she had informed the FIA that she suspected a link between Mirza and Akbar and that they should contact the then Inter Services Intelligence chief Lt General Faiz Hameed.

“That was the last I heard from the FIA. A self-confessed criminal who called for the murder and public lynching of a Supreme Court judge was patronised and facilitated,” she wrote, adding that her family had been facing a “sustained troll army attack”.

She alleged that Naseem “treated public funds as his personal largesse and distributed funds to those who would speak against my husband”.

“He displayed his misogynist views of women when he said in the Supreme Court that I am lucky that I will not have to burn like satis on the funeral pyre of my dead husband … He made fun of me and of my earnings behind my back, and challenged me to justify them,” she said. “I accepted his challenge and came to court, but then he ran away. He did not come to the court and face me when I stood and argued my review petitions.”

She said she had been facing such trials and tribulations alone and her husband did not once use his office to help her.

“Once again at a very emotional and difficult time in my life I am harassed and intimidated at my home,” she added.

Where to get a Foreign Wife

‘The Kardashians’ becomes biggest premiered series in US, Hulu confirms

Pakistani PM’s Russia visit next week will be a game changer, says minister